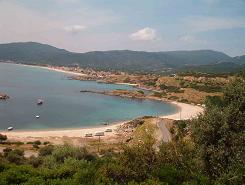 Sithonia is the middle peninsula of Chalkidiki and is of great interest. The exciting landscape of this prong appeals to nature lovers and holiday makers seeking refuge from the trappings of civilization. The coastline is attractively varied. A succession of fishermen's hamlets, picturesque little harbors, deserted beaches of all sizes surrounded by trees and bushes. The peninsula is a symphony in blue and green. However, its primitive surroundings do not suggest lack of tourist facilities. There are hotels of all standards to choose from, as well as rooms and self-catering apartments. Numerous camping sites are also spread throughout the Sithonia peninsula. As far as entertainment and amusement are concerned, Sithonia manages to combine traditional beauty and hospitality with contemporary pleasures. Moving on to Sithonia, you must take your time and enjoy the idyllic blue-flag beaches.

The resort along the 4 kilometer strip of coastline between Nea Moudania and Nikiti are counted as being in Sithonia, although they are not on the actual peninsula. From the main, sometimes relatively busy road, you don't get much impression of their presence, and you usually have to turn off down the individual side roads to reach the resorts themselves which are located along the sea. The local road network is less developed than Kassandra's, but respectively hosts less tourist flows.

Starting out from Nea Moudania, the road leads to Olynthos, long ago an Athenian colony of which some ruins remain. Gerakini, is at the base of Sithonia peninsula and the first resort you come to. Located 16 kilometers from N. Moudania, is a developed area with hotels camping and port. The beach itself is fairly ordinary, with a mine at one end. Some five kilometers along the road, there is a sign for the beach road which leads down to the seafront and the little resort of Psakoudia. It's worth making the short detour inland from Psacoudia to see the traditional village of Ormylia, with its attractive old buildings. Following the road, you reach into the small but attractive village of Metamorfosi. The beautiful scenery and the dry climate make Metamorfosi an ideal resort. Nature has given the area wonderful beaches, starting from the point where the pine-tree forests stop, ideal for swimming during summer months. Nikiti is the next village on the road and offers to the visitors beautiful sandy beaches and traditional stone-built houses. It is one of the oldest villages in Chalkidiki while the beaches and the colourful successions of granite, pine trees and the sea satisfies those who love nature.

After Nikiti, you turn down into the peninsula of Sithonia proper, and the scenery just starts to unfold its ideal combination of blue seas and wild green vegetation. The road round the peninsula climbs quite steeply at times, and then sweeps down towards the sea through thick forests. From Nikiti you can choose either the right direction of the road which leads to villages facing Kassandra peninsula and Toronaios Gulf, or the left part of the peninsula which faces the imposing Athos peninsula and Siggitikos Gulf.

Following the road towards east Ormos Panagias is the first of the east coast resorts, a picturesque hamlet and tiny harbour. From there organised daily cruises to Athos depart. At 4 km to the north is Agios Nikolaos with its old houses made of wood and stone and Pyrgadikia looking as though it belonged on an island. To the south of Ormos Panagias is Vourvourou a seasonal community and administratively it belongs to the village of Agios Nikolaos at a distance of 120km from Thessaloniki and 50km from Polygyros. The village is a long ribbon-like development running along the coast, with masses of trees and loads of newish private villas built among them. Continuing south and before arriving to Sarti there are plenty of organised campings with the most famous being Armenistis located in one of the most beautiful beaches of Chalkidiki.

Sarti is quite a sizeable resort by Sithonia standards. It has a long, sandy beach and clear view to Athos peninsula. Just behind the coastal resort, about 2 km from the main road, is the island of Sykia with its friendly and welcoming locals. To the southern tip of the peninsula, there is Kalamitsi with adequate camping facilities. One of the most attractive spots in Sithonia, reached by a stunning road curving through the mountain forests with the deep blue of the sea far below is the bay of Porto Koufo. The bay is almost completely enclosed by green hills with a cool clear sea. On the south of Porto Koufo, at the site of ancient Toroni, you can still see the ruins of the old fortifications dating back to antiquity and continually augmented up until Byzantine times, as well as the ruins of Early Christian basilicas. 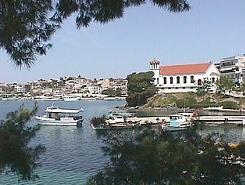 Being already at the west part of the peninsula, Neos Marmaras is an enchanting cosmopolitan tourist resort one of the most notable resorts of Macedonia. It is built on hills and is surrounded by a beautiful pine-tree forest. To the East and to the West there are two long beaches with beautiful stretches of sand and clear sea which has been awarded with the European "Blue Flag". The visitors' possible material needs can be satisfied at the various shops of folk art, clothing, food etc., and at the various restaurants serving food of excellent quality and extremely fresh fish. For their entertainment they can choose among a wide variety of bars, pubs, discos etc., which gather people from various places. On a slope of the hills, they can find the beautiful, old settlement of Parthenon, the buildings of which are preserved. To the east of Marmaras the enormous cluster of hotels, the Porto Carras is situated. It has an excellent organisation and a safe marina for big and small boats.